Most of  land developers may assume the campaign of “Wetland  Preservation” as “Waste Land Project”, as they always think about skyscraper condominium being sprung all over the places replacing clusters of reeds swaying over the shallow water of the wetlands.

Korea is one of the world ranking in preserving the wetland since many wetland areas have been designated as the eco-tourism national parks around the country, especially in the southern part of Korea, including Suncheonman Bay Wetland Reserve. They have been gradually growing as major tourist attractions for Korean and foreign tourists. They are always added as the regular attractions in every tour programs in their areas.

Here I will express my good impression of how Korea preserved the wetland area since I have the opportunity to take the trip to Suncheonman Bay Wetland Reserve recently. It is located in  Suncheon, Jeonnam in South Korea, Suncheon Bay is a coastal wetland, composed of a 3.5 km long stream, with 5,490 acres wide tideland and a 570 acres wide field of reeds. Due to its natural coast, it is the habitat of migratory birds and plants and animals. It is the first Korean coastal wetland, Suncheon Bay Wetland Reserve, registered on the list of the Ramsar Wetland on January 20, 2006.

Firstly, we began with Suncheonman Bay Eco-Museum where we could learn about the history of the forming of Suncheonman Bay Wetland and a range of animals, plants, and flora exhibits, and especially, to learn more about the regional ecology system.
Later, we took the boat trip to observe the beauty of the scenery, including animals, rare birds, and wide range of flora and fauna.  Surprisingly, we were accompanied by a group of very young Korean students, assumingly Kindergarten. They were guided by their school teachers, I guessed. As soon as the boat was coming close to the huge bunch of reeds, we had to feel embarrassed when some of those kids turned to our group and said “Sshh” as the gesture for us to be quiet for not to disturb the animals or birds inside those bushes.

According to the guide, the wetland in Suncheonman Bay is the rendezvous and resting area for migratory birds in the long haul journey down South such as Eurasian curlews or from Siberia to Australia or to Thailand. They will use the huge area of wetland here as their “transit lounge” to take the rest and the natural shelter in order to revitalize their strength by eating rich food in the area for the second half of the journey to their destinations.
One of the cleverness of Korean people in preserving the natural resources or historical remains by using them as the shooting scenes of popular TV drama series or major feature films, and then, they will be soon turn into popular tourists attraction among the fans of those series or films. However, I don’t know whether any wetland area have been used as the location of any drama series or films yet.

The important of this trip was to have a chance to experience and indulge in the beauty of the nature of wetland in Korea, but more important was how Korean preserved and developed the wetland as tourist attractions. However, the most important was how the Korean government educating and giving the knowledge of how to preserve and conserve these areas as the sustainable to their people since they were very young.

Last but not least, to reach Suncheonman Bay, you can take the flight from Gimpo Airport to Yeosu Airport, and took local bus, it is located at 513-25, Suncheonman-gil, Suncheon-si, Jeollanam-do. The opening hour starts from 8.00 a.m. until sunset (varies by the season).
Admission fee:
8,000 won(for adults), and 4.000-6,000(for teenager to children)
Reference
www.suncheonbay.go.kr
Visit Korea website
_____________
Stay in Korea / Private apartment, guesthouse & Hanok booking
www.bnbhero.com

Here you can find all sorts of character themed . They sell coffee, tea, kind of soft drink.  Not only drinks, there is also pudding, cake, cookies,ice cream etc.

There are so many cute seats and tables inside the cafe with cute decoration.

And also cute LINE's Friend  accesories you can buy here.

How to get there??Take subway Sinbundang Line to Pangyo Station. Exit 2 to Hyundai Department Store.

Chuncheon International Mime Festival, is a week spring festival to popularize the mime art since 2011! Each year has different theme, from "A body in the beginning" in 2011, to "Acts" in 2015, people appreciate the performances from Korea and abroad, and enjoy the happy moments with everyone! And in the week of Mime Festival, there are several programs you may join!
Ra-percussion Samba Party

With a goal of flying in the sky, the team "Creative DANDI",  want to give audience an elegant vertical performance!
The Kappa

Based on the spirit of Japanese culture, performers through the spiritual musk dance, and also invite audience to join the performance!
There are more performances and programs more than out introduction which you may find the further information on the official website of Chuncheon International Mime Festival. http://mimefestival.com/ 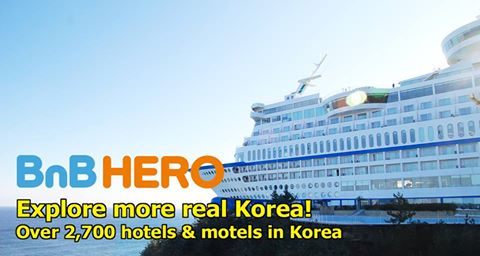 Korea's #1 Accommodation site now has the largest supply of hotels, motels and guesthouses in South Korea.
BnBHero's partnership with Bookingcom allows its users access to the largest network of hotels and motels in South Korea!
Now BnBHero users will have access to the lowest rates for:
- Over 2,700 hotels & motels (in partnership with Bookingcom) in Korea
- Over 3,000 Guesthouses/vacation rentals rooms in Korea
- Reservations for hotels and motels are made on our partner site with no booking fees!
- Guesthouses/vacation rentals are provided by BnBHero- Korea's #1 Accommodation Provider
The new subcategories are available on the top of the search navigation screen, giving you the largest access and best choices online.
Now you can book a hotel, motel or guesthouse/vacation rental at any destination in Korea on our website, BnBHero!
www.bnbhero.com 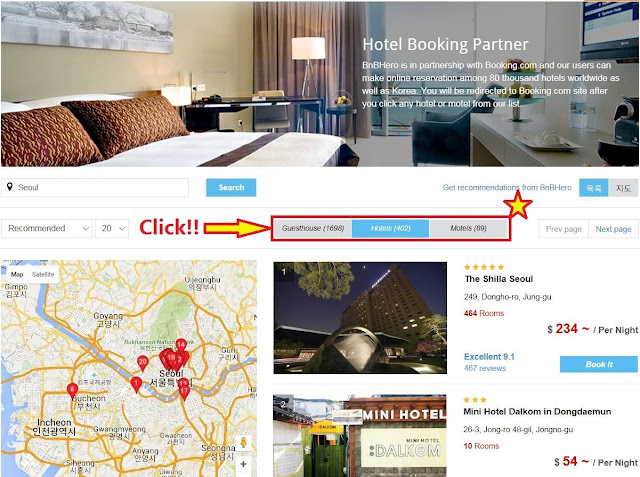 Are you a fan of beautiful modern architecture and landscape?
Here I would like to introduce you Northeast Asia Trade Tower or NEATT. The name is Korean is 동북아무역타워.

The building is located in Songdo International City where it has the slogan of "a City Embracing the Future." The main theme of the city itself if to create a "harmonious combination of technology and the natural environment."
This skyscraper is regarded as the landmark of the Songdo International Business District or known as Songdo IBD. The district is intended to be a new smart city built on reclaimed land along Incheon's waterfront. The district is a part of Incheon Free Economic Zone along with Yeongjong and Cheongna. The establishment of the Free Economic Zone is since 2003 and its purpose is to act as a center for government’s strategy of making Northeast Asia’s economic central.

Thus, the building not only represents modernity, innovation but also the economic importance of Incheon to South Korea as well as to Northeast Asia.